This Land – Tallys An Tir at Kestle Barton

10:30am-5pm each day and is free and open to everybody. The year-long project ‘Tallys an Tir – Traditions & Stories of the Land’ will soon be coming to an end, and is culminating in a series of celebratory events around Cornwall. The first event ‘This Land’ will take place over the weekend of the 31st August- 1st September at Kestle Barton; an ancient Cornish farmstead situated above the Helford River in Manaccan. Over the past year, the project has been working in the local area to record and collect stories, photographs, maps and objects that explore the local landscape, in particular farming. Led by the Institute of Cornish Studies at Exeter University, this project has been working with Kestle Barton and a group of people from the local area to bring together a range of exciting material, which will be displayed at the ‘This Land’ event. The project, which is funded by the Heritage Lottery Fund with additional support from FEAST Cornwall, has also worked with children from 3 local primary schools, using farming stories as inspiration for creative work. Sarah Chapman, who is leading the project, says “the group that we have been working with around the Manaccan area, have put in a lot of hard work over the year and we are all really excited to see it all come together. Alongside the colourful films made with local primary schools, an installation and performance of ‘Keskerdh An Kammva Dro’ by artist Julia Giles, art workshops for families and a few more surprises, the weekend promises to be a memorable one.” Also featured as part of the event will be a range of photographs of local farming families taken over the 1990’s by 4th generation Helston based vet John Head. The project ‘Tallys an Tir’ has been able to help John scan over 200 of his negatives, preserving these as valuable records of the time. The photographs themselves are beautifully taken and show a very natural relaxed view of farming in the Lizard area from the 1990’s. Accompanying these photos will be a short film, featuring local farmers reminiscing about some of the characters that appear in the images. This will be screened alongside other short films, at 2pm on Saturday 31st August. Curatorial Director of Kestle Barton, Dr.Ryya Bread, explains “A strong strand of our programme is to show work that relates to the farm and its place in some important way. This is open to many interpretations and different forms, including extending our relationship to growers and other land users as well as artists. On the Sunday of the “This Land’ event, we also look forward to Paul Chaney, an Artist in Residence for 2013, along with Kenna Hernly, introducing and implementing their FieldMachine at Kestle Barton: an interactive computer programme that maps potential land use from information about food values and the desires of individual participants.” 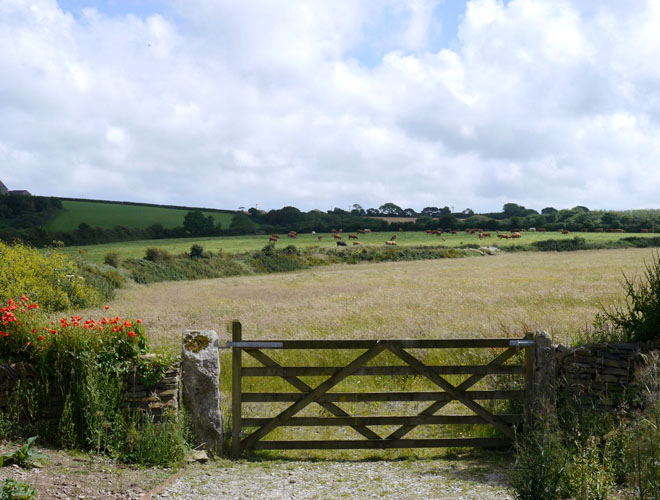 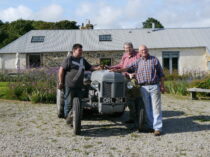 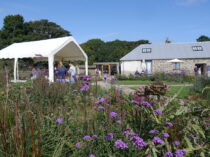 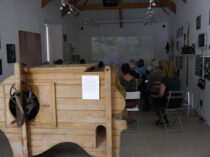 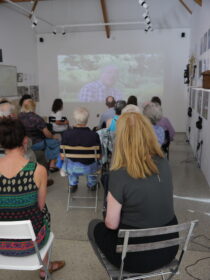 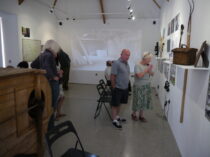 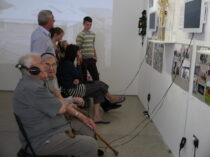 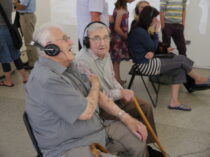 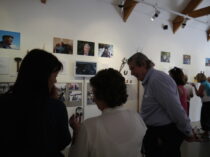 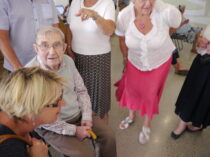 Throughout history, in an effort to influence elemental forces and thereby ensure the safe return of the next season and a good crop, people who work the land have performed rituals and ceremonies. Keskerdh an Kammvra-dro devised by Julia Giles recalls such a ritual.

Keskerdh an Kammvra-dro is a 300 metre walk around a route marked out in the shape of a cross – in this case in the orchard at Kestle Barton. Each of arm of the cross is decorated with coloured bunting to represent a season. The walkers follow the coloured route around the cycle of the seasons. 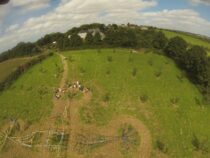 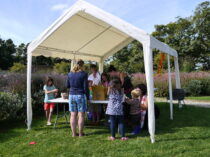 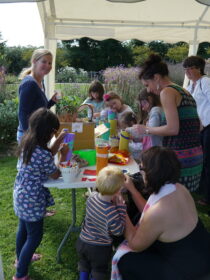 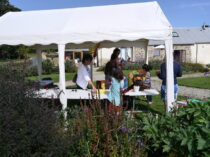 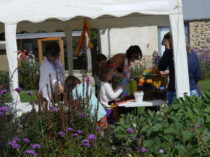 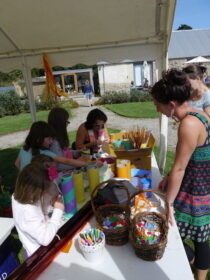 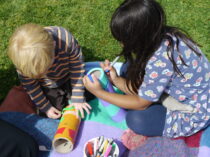 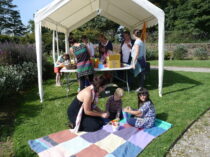 During a Hypothetical Reterritorialisation event the audience is asked to use the interactive artwork FieldMachine (a bespoke computer software application) to design their own system for self-sufficiency in a hypothetical future scenario where there is no access to fossil fuels or overseas imports.

Artist Paul Chaney and researcher Kenna Hernly created FieldMachine to help them establish FIELDCLUB – an experimental four-acre homestead in Cornwall. During the FIELDCLUB experiment Chaney and Hernly created a hay meadow, planted trees for fuel and hedging for controlling livestock, trialled hand cultivated grain, and created vegetable gardens using a system of self provision suggested by the FieldMachine software.

Now, Chaney and Hernly use FieldMachine in a series of events in which the public are asked to choose what kind of foods they would grow to meet the World Health Organisation’s recommended daily nutritional intake. The participants also make choices about the size of living accommodation, and what biofuels they will use to heat it.

The FieldMachine then shows exactly how much land will be needed for each person per year, and calculates how many people could live in the same way within the host country. The FieldMachine prints a small plan (called a Unit) for each participant, who then positions their plan on a large map of the immediate local area, alongside all the plans created by other participants creating a Hypothetical Reterritorialisation.

The participants effectively ‘remap’ the local area, and in doing so explore many questions of land use efficiency, land politics and sustainability. The work is a collaboration with the audience, as the success of the work is dependent on the public’s engagement.

Paul Chaney b. 1974, lives and works in Prague. Recent solo shows and projects include:  The Sun is Black, Museum of Art and Design (Benesov, 2012), and Divus (Prague, 2011); The Lonely Now, Goldfish (Penzance, 2008).  Selected Group Shows:  TURBOREALISM – Breaking Ground, IZOLYATSIA Center for Cultural Initiatives (Ukraine 2013); FIELDCLUB and Friends – Late at Tate St Ives (2011); In Abundance, Kestle Barton (Cornwall, 2011); Garden Marathon, Serpentine Gallery (London, 2011), Art and War in the Last Resort, Kettle’s Yard (Cambridge, 2011), and PEER (London). Curatorial work includes the delivery a programme of art events and residencies in Falmouth and London for Urbanomic 2009-2010 and in 2012, the establishment of the London HQ of DIVUS – a Prague based art publishing house.

Kenna Hernly b. 1980, lives in Cornwall and works for Tate St Ives in the role of Learning Curator for Adult Programmes. She has a MA in Contemporary Visual Art from University College Falmouth, and a BA in the History of Art from St Mary’s College of Maryland, USA. In 2007 Hernly co-founded FIELDCLUB with Paul Chaney. She also worked with the independent publishing company and arts organisation, Urbanomic, between 2009 and 2010. Other programming and curatorial work has included: The Story of NPK: Agriculture as Extraction – The Penzance Convention (Cornwall, 2012); FIELDCLUB and Friends – Late at Tate St Ives (2011); Imagine Being Here Now Tour – The Cornwall Workshop (Cornwall, 2011); and The Real Thing – Late at Tate Britain with Urbanomic (London, 2010). 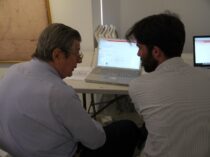 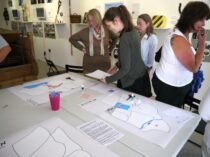 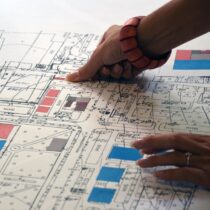 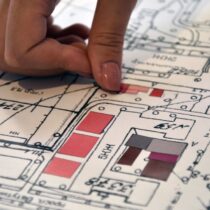