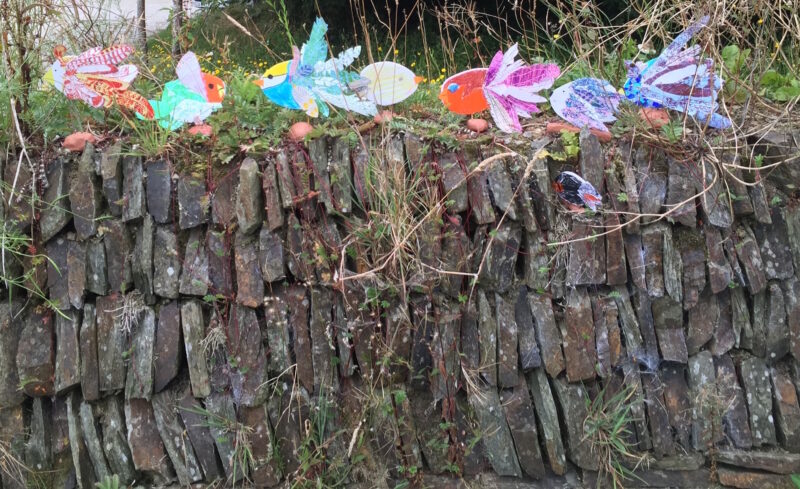 Kestle Barton will be closed for the winter after Saturday 29 October. This season has been filled with a range of exhibitions and events that helped to inform our ongoing interest in producing contemporary art within a rural environment.

Paul Chaney began our 2016 exhibition series with his expanded vision of how Kestle Barton as a ‘Sector’ could contribute to his post-apocalyptic Lizard Exit Plan – laid out in a new collection of cyanotype blueprint diagrams and screen prints (Lizard Exit Plan: Kestle Barton Sector 19 March – 8 May). For Naomi Frears: New Work (14 May – 3 July) an entire wall was erected to create a suitable gallery space for the ambitious and mesmerising film installation entitled, 10. The alterations transformed the space and still preserved an area for Frears’ works on paper to be seen; these related to Frenchman’s Creek and the surrounding area. Death & Circuses (9 July – 4 September) was an installation of very large paintings by Nicola Bealing inspired by the archives of the Helston Folk Museum. In addition to filling the gallery walls, a separate collection of works on paper could be found in the atmospheric undercroft of our newly renovated wing of the original Farmhouse.   The season ended with the sensitive and insightful photographs by Jem Southam of Ray’s Sheds: The Hidden Work of Ray Exworth (10 September – 29 October) – a tribute to the creative life of one of Cornwall’s most interesting sculptors.

All our exhibitions this year were accompanied by Artists Talks at the openings and free risograph publications. These publications included essays, stories and images that supported the main themes of the exhibitors and offered opportunities for artists to collaborate with others in reflecting on the significance of the work. These are available to view on the 2016 exhibition pages of our website in pdf format.

The events this season brought children and students of all ages through our doors, along with amazing artists, storytellers, authors, musicians, land workers and culinary wizards. Kestle Barton also travelled this year: producing the collaboration between Abigail Reynolds and St Keverne Band, The Mother’s Bones and showing the Director’s Preview at Porthallow Village Hall, with a performance by the Band on the beach.   We had our first Festival of Children’s Literature and a Fireside Storytelling Supper with Annamaria Murphy. Lucy Grant gave a whole series of wonderful Heads & Hands workshops both at the Festival and throughout the summer. Dominic Bailey also spent the summer here, between catering foraged-like dinners in collaboration with Paul Chaney for the Critical Camp series and his own Lazy August Luncheon in the Garden series, he made good use of the fresh produce in our kitchen garden.

For all those that are interested in Paul Chaney’s Critical Camp series that took place in the Encampment Supreme pavilion in our orchard this summer, all six camps were recorded and presented by Bram Arnold in Trail Mix[ED], broadcast on Resonance FM this autumn. These broadcasts can be heard from our website here and provide an archive of the fascinating range of thinkers, artists and collaborators that Paul Chaney invited here to engage in central themes related to his work.

The week of masterful music and sounds created by the musicians of Spontonality, again brought a vitality and level of quality artistry to Cornwall that was a privilege to host and witness. Their work with community groups and the Falmouth University Music Academy students was inspiring for everyone involved. Live streams from parts of the two evening concerts were broadcast on our Facebook page and can still be found there.

We wish to thank all of the public, and specific groups, that visited Kestle Barton this season. We would also like to thank the artists and collaborators that made our programme so dynamic this year. Finally we wish to acknowledge our gratitude to Arts Council England for their support in that programme, enabling us to expand the possibilities and conversations across local and more distant communities.

We will reopen on Saturday 8 April 2017, starting the season with an exhibition of new work by Jessica Cooper based on her developing observations and appreciation of the gardens and grounds of Kestle Barton, in relation to her growing practice since her last show here in 2013.   In the meantime, we wish everyone a peaceful winter season with much joy.