Jonathan Hoskins – Jonathan will talk about relevant past projects exploring grassroots social housing, gentrification, and his research with artist Margareta Kern at the Cranbrook estate, a new town near Exeter.

Layla Curtis – Layla will talk about Trespass (2015), an app for iphone which maps an oral history of a northern English edgeland and tempts the user to trespass in order to access the work. She will also discuss research she carried out into current and historical landownership, in a rural area of north Lancashire, with the aim of producing a cadastral map showing change over time. For more information about both projects see the commissioner’s website: http://www.storeyg2.org.uk/

Ian Nesbitt – Ian will present a small selection of works loosely exploring the Commons in urban and non-urban settings.

Development, dwelling and transitivity, public talk by Dr Mike Hannis. Is ‘development’ something done by people, or to them? Can it really ever be ‘sustainable’? Can land-use planning be detached from the ideology of growth?

Screenings of artists’ films in the Pavilion. Curated and introduced by Marcy Saude.

This screening will present international moving image work exploring alternative strategies for organising our lives and living environments on earth in the contemporary moment. Rejecting false dichotomies such as nature and civilisation, technology and primitivism, past and future, life and politics, and art and polemics, the work chosen will highlight roadblocks to our survival as, well as ways forward. See showreel details below. 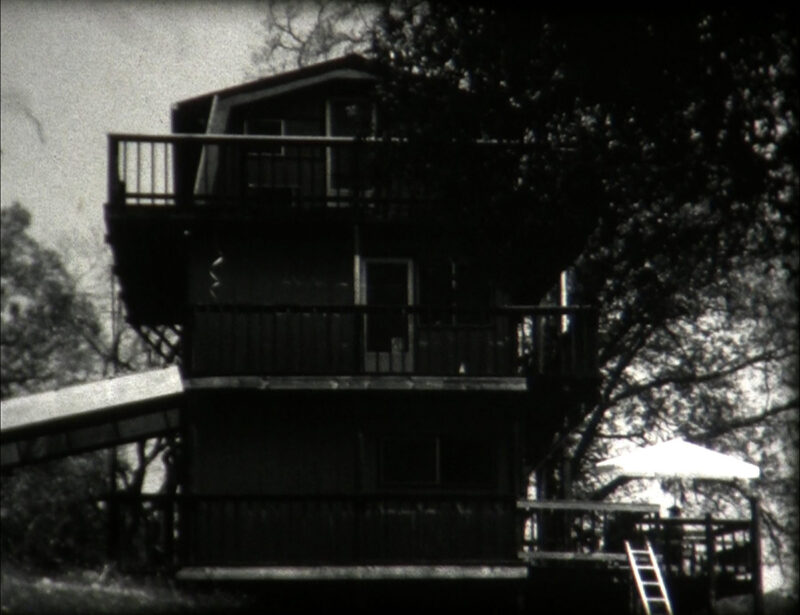 This screening, curated and introduced by Marcy Saude, presents international moving image work that explores utopian architecture and communities as alternative strategies for organising our lives and living environments in the contemporary moment. Rejecting dichotomies such as nature and civilisation, technology and primitivism, past and future, life and politics, and art and polemics, works chosen reflect and refract possibilities for planning spaces that free our imaginations.

Some of the films will be screened on 16mm, and the screening will be presented off-grid in Paul Chaney’s Pavilion – powered by a 12 volt solar system.

Handmade Home (Marcy Saude, 16mm on HD, 4 min, 2012, USA)
Handmade Home is a short document of the house built by the artists Robert Nelson and William T. Wiley in the forests of Mendocino County, California, narrated by Nelson.

OH (Anouk de Clercq, video, 8 min, 2010, Belgium)
OH seeks to reanimate the ambitious, utopian spirit of renegade architect Etienne-Louis Boulle (1728-1799). True to the spirit of the utopian architectural tradition Boullée is part of, he is probably best remembered today for one unrealised project in particular: the design for a gigantic sphere-shaped shrine dedicated to one of the founding fathers of modern science, Isaac Newton (1784).

Our Being Is Becoming (Demand Utopia, 4 min HD, 2018, USA)
A short video describing the philosophy of social ecology and the ethos of the new eco-warriors in green. Our Being is Becoming, not stasis. Our Science is Utopia, our Reality is Eros, our Desire is Revolution.

Everything’s coming together while everything’s falling apart: the ZAD (Oliver Ressler, 37 min, HD, 2017, Austria)
The film on the ZAD focuses on Europe’s largest autonomous territory that is located close to Nantes in France. The ZAD (zone to defend) emerged from the struggle against a new airport. In 2012 the French state’s attempt to evict the zone was fiercely resisted by more than 40,000 people. In 2017 250 people in 60 collectives were living permanently at the ZAD occupying the wetlands, fields and forests. The ZAD is an example that the creation of alternatives and resistance need to happen at the same time. The film is built along a group discussion with activists living at the ZAD.

Every Primitive Space Commune (Marcy Saude, 3 min, 16mm on HD, 2017, UK)
A film made in one afternoon on one roll of 16mm film at the Saltash Library in Cornwall, using images from library books in combination with text fragments from Kim Stanley Robinson and the Invisible Committee in order to evoke a brief future primitive vision of communal living in space.