This summer Kestle Barton features an installation by Hamish Fulton based on a commissioned walk generously funded by Arts Council England: Walking Between Walks connects ‘the invisible footsteps of seven previous walks’.

Hamish Fulton (born 1946) describes himself as: A WALKING ARTIST. In October 1973, having walked 1,022 miles in 47 days from Duncansby Head (near John O’Groats) to Lands End in Cornwall, Fulton decided to ‘only make art resulting from the experience of individual walks’. ‘Walking art’, he explains, ‘is the bringing together of two entirely separate activities, walking and art. Every piece of art I materialise, contains a walk text. I make art exclusively from walks that I have personally experienced. If I do not make a walk, I cannot make any art.’

Fulton translates his walks into a variety of media, including photography, illustrations, and wall texts.

His work is contained in major museums collections, such as the Tate Britain and MoMA.

During a twelve day period this year, Hamish Fulton linked seven previously completed walks made entirely or partially in south west England over a period of many years. These include the public group walks made in Penzance during the second Cornwall Workshop then marking Fulton’s 40th anniversary of his commitment as an artist to the act of walking.

Five years on, Kestle Barton is delighted to mark his 45th anniversary with this commission and exhibition. 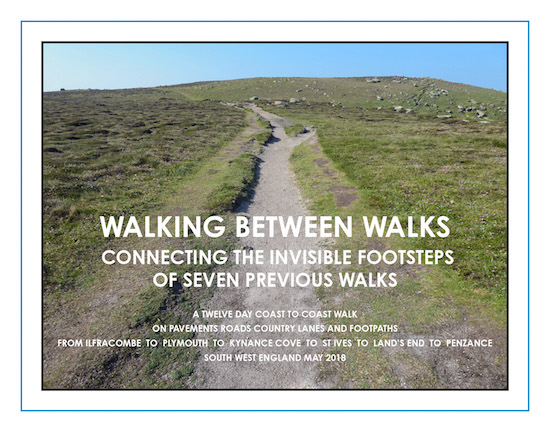