Togetherness: Notes on Outrage celebrates the pioneering work of the architecture critic Ian Nairn whose 1955 edition of Architectural Review, entitled Outrage, revolutionised architectural criticism. For Outrage, Nairn travelled across England observing and documenting the urban sprawl and ubiquitous civic architecture. Broken into 25-mile segments, Outrage proposes an audit of every facet of subtopian aesthetics, covering subjects ranging from wire fencing, telegraph poles and street lights, to military installations and power stations, culminating in a manifesto and checklist of planning malpractices.

Togetherness: Notes on Outrage at Kestle Barton represents the continuation of an ongoing research project first begun at the London project space, South Kiosk. Having first explored Nairn’s writings within an urban context in London, Togetherness moves to Kestle Barton to focus on Cornwall and Nairn’s writings on the ‘wild’ environment. For the show, photographer Hammond presents a new large scale collage work, Lands End in reference both to the Turner painting of the same name and the potential change in the landscape of the area. Tootal’s large format architectural photographs reference a number of site visits made to new residential and business developments across Cornwall, the South-West and wider England over the past year. A recent graduate from Goldsmith’s MFA programme, Badham presents MORNING. A long term research project, MORNING explores the correlation between a series of ‘space race’ influenced climbing frames and the post war New Towns movement. The frames, their design a reflection of the optimism of the period, subsequently fell into a state of near disrepair epitomising the stagnancy of the New Towns movement across England.

Togetherness: Notes on Outrage at Kestle Barton was made possible with funding from Arts Council England. 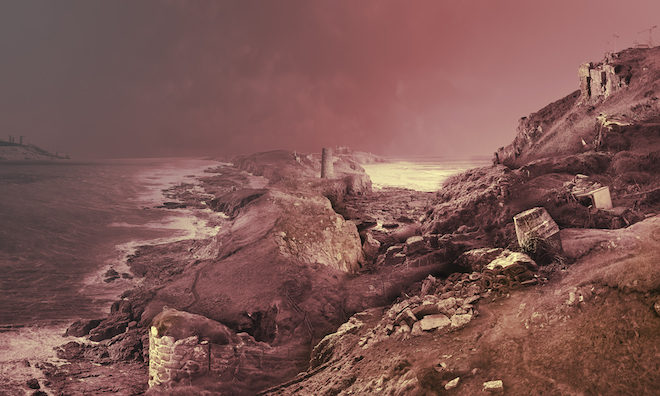 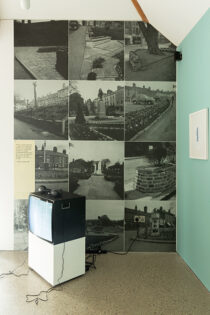 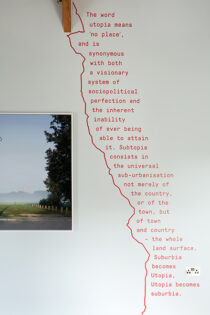 Hammond’s practice is concerned with decaying British post-industrial landscape and the material language of urban regeneration. Her sculptural photo work, Bermuda Grass, borrows its name from an invasive weed, though its exoticism might be attributed to that of a luxury interior palette, a contemporary bathroom suite, or an imported house plant. Bermuda Grass recalls the weeds that emerge from the cracks in the shifting post-industrial plane, whilst referring to the digitally warped visions of simulated vegetation that can be found in speculative images of opulent living.

Tootal’s photographs consider the way in which abandoned industry mixes with functioning architecture and development, depicting spaces left awaiting completion or areas of recent renewal. The modern British landscape is represented as rich with human activity, yet bereft of human presence. Obscured by a lack of context, yet strangely familiar. Tootal’s subjects are presented in such a way to highlight their eccentricities, focusing our gaze on the peculiar nature of their architecture and terrain. 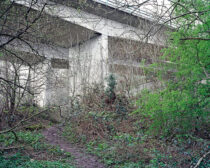 Ben James is the co-founder of South Kiosk.

South Kiosk explores the evolution of technology in art through a full exhibition programme and publishing platform run from its gallery space in London Bridge.

Set up by Ben James and Curator Dave Charlesworth in 2013, South Kiosk has curated exhibitions at London’s Design Museum and Food Face Gallery, Peckham before taking up its own permanent space in Southwark in January 2014.

The current exhibition at Kestle Barton is co-curated by Ben Evans James of SouthKiosk Gallery in London. This episode of Trail Mix[ED] is less of a warning than a prophecy of doom: by the end of the show we’ll have uncovered the work of photographers Felicity Hammond and Polly Tootal amongst other artists whose works describe, articulate and respond to the built environment and the legacy of architectural critic Ian Nairn. Featuring texts by Ian Nairn, Tacita Dean, Felicity Hammond and Polly Tootal, tracks by Tim Hecker, Mark Pritchard, The Emeralds and Greg Haines.