In the final hour (3-4pm) on the Tuesday and Wednesday sessions (17-18 Oct) the improvising circle grows to include the ‘audience’. All are considered part of the performance and welcome to either participate or remain silent. You are warmly encouraged to bring instruments and other sound sources to these sessions.- 1:30pm

A music improvisation series returns to Kestle Barton gallery for a third season following the great sounds and success of previous years. Visitors are invited to drop into the gallery to listen throughout the week and join us for two evening concerts. 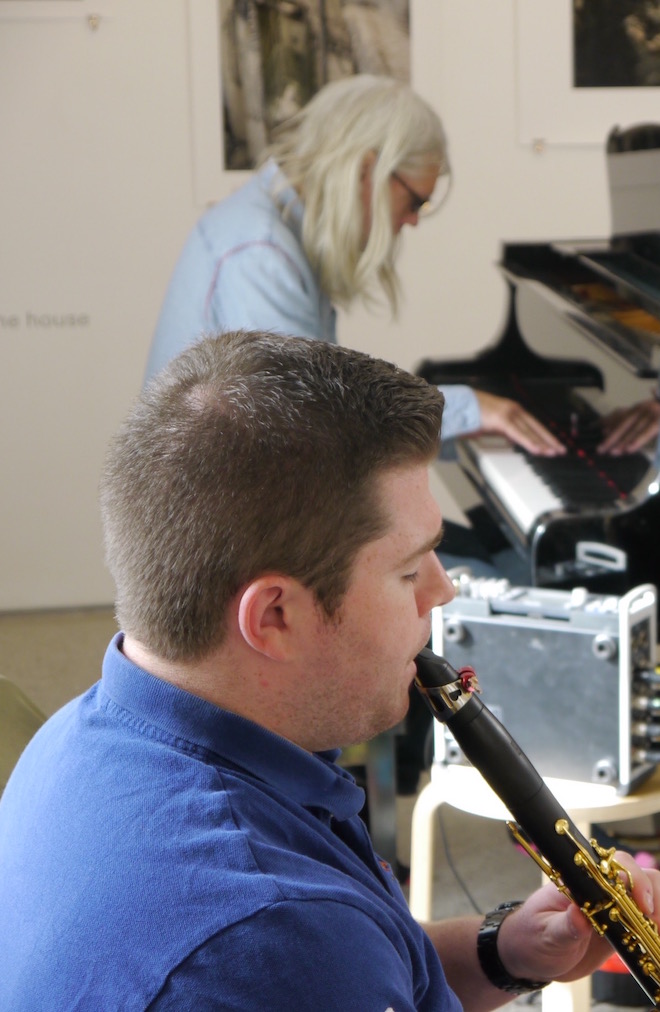 FU Academy of Music and Theatre Arts in sessions with Spontonality: Click here for short video 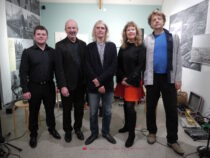 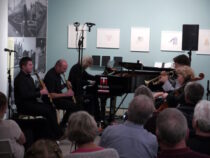 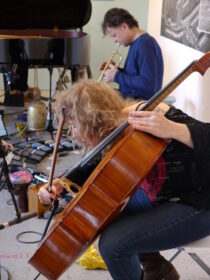 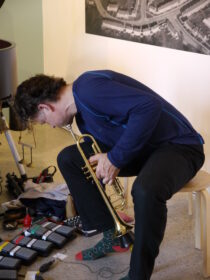 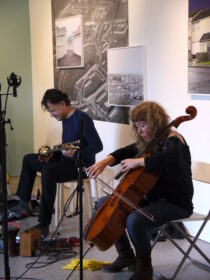 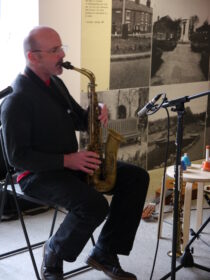 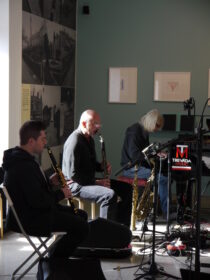 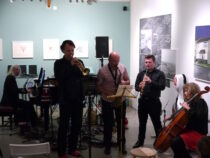 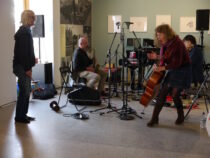 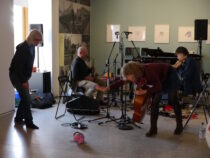 Trail Mix is a geographical show about art and the journey as a form of process and product. On this weeks show we’ll be following improvisation specialists Spontonality as they visit Kestle Barton for a week long residency in the gallery space. Initially we’ll join them for a workshop at Falmouth University though, where 20 students will hit their instruments and use their voices in new and as yet unexplored ways. With readings from David Toops Into the Maelstrom and an interlude provided by La Monte Youngs The Well Tuned Piano this journey on the trail is, at its heart, entirely improvised.

From a solid grounding in the classical world, Tim West has moved predominantly in other musical spheres. Alongside composition and performing he has developed the science of music, leading to a significant advance in its understanding. 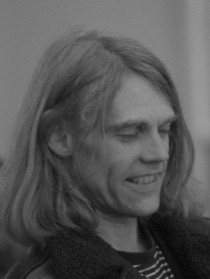 Torbjörn Hultmark was born in Stockholm, Sweden in 1957. He is a naturalised British citizen subsequent to having moved to the UK in 1985. Torbjörn studied trumpet and composition at the Gothenburg Conservatoire of Music and at the National Centre for Orchestral Studies, Goldsmith’s College, London. His main teachers were Bengt Eklund (Gothenburg) and John Wallace (London).

Alongside his work as a member of Notes Inégales and the Headspace Ensemble, he works with orchestras and ensembles such as the London Sinfonietta, Philharmonia Orchestra and the Chamber Orchestra of Europe as well as film and TV session work. Torbjörn has worked as a soloist with the Northern Sinfonia and with the BBC Philharmonic, on BBC Radio 3 and at the Albert Hall Proms. He was a founder-member of Chaconne Brass.

Torbjorn is also an experienced composer whose compositions have been performed extensively, including Scandinavia, Australia and New Zealand and the UK (BBC R3, Classic FM etc).

Tony has worked as a session musician in many of London’s studios including Lansdown Studios, Angel Studio, Abbey Road and Maida Vale Studios. He has frequently performed with Michael Garrick, both live and on disc, in large and small ensembles, often with his wife, singer Nette Robinson. 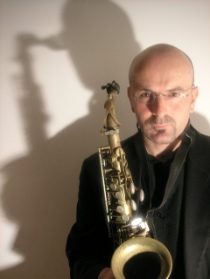 Julian Bliss is one of the world’s finest solo clarinetists excelling as concerto soloist, chamber musician, jazz artist, masterclass leader and tireless musical explorer. He has inspired a generation of young players, as guest lecturer and creator of the Leblanc Bliss range of affordable clarinets, and introduced a large new audience to his instrument. The breadth and depth of Julian’s artistry are reflected in the diversity and distinction of his work. He has appeared with many of the world’s leading orchestras, including the London Philharmonic Orchestra, BBC Symphony Orchestra, City of Birmingham Symphony Orchestra and the Academy of St Martin in the Fields, and performed chamber music with Joshua Bell, Hélène Grimaud, Steven Isserlis, Steven Kovacevich and other great interpreters.

Julian stands today among the finest musicians of his generation. He launched the Julian Bliss Septet in 2012 at Wigmore Hall and at Ronnie Scott’s Jazz Club in London and fronted their debut disc, Benny Goodman –The King of Swing. This programme has gone on to be performed across the world, including a sell-out performance at the Concertgebouw.

Her one woman show Revue Z has recently played at festivals in Aldeburgh, Plush, Denmark, Iceland, Spain and Wigmore Hall in London where she gave a recital of music for cello and electronics earlier this year in collaboration with Young Producers scheme. The premiere of her commission for BCMG “Broad Street Burlesque” was performed recorded for BBC Radio 3 last year as part of 25th anniversary concert directed by Thomas Adés and her commission for CoMA ”Slap On” has had multiple performances since it’s 2016 summer inauguration, going to Spain later this year performed by Hong Kong New Music Ensemble. Schott publish her music.

Zoë was a judge on BBC TV’s Maestro and Young Musician of the Year; commentator for BBC Proms, appeared on Newsnight Review, is regular guest BBC Radio 3, has contributed articles for publications including the Guardian, Evening Standard, Classical Music Magazine, The Strad and was on the UK panel for the 2009 Eurovision Song Contest.

She is much in demand for educational activities including Artistic Director of the Saigon Chamber Music Festival in Vietnam, tutor for the National Youth Orchestra GB, Harstad Strings in arctic Norway, Aldeburgh Music, Pro Corda, is a regular jury member for international competitions including Royal Philharmonic Society awards and Young Musician of the Gulf in Bahrain.

She studied at the Royal College of Music, Clare College, Cambridge, the Royal Academy of Music and the Chopin Academy in Warsaw. 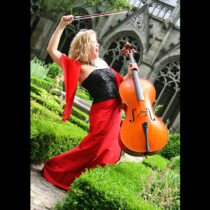