‘…so he bought a cottage in remote West Cornwall and built a large wooden shed and moved all his existing work into it – no question of doing any work on the cottage until the shed was completed. This became a very private place, his own sanctuary, and to allow anyone to enter would be to give them access to a very private and personal part of his mind which he did not feel inclined to share with anyone. For some years even I was not allowed in and he told visiting friends that this strange large building was a neighbouring farmer’s barn.’ – Susie Exworth, 2016

In 2011 Kestle Barton made a landmark exhibition documenting the work of Ray Exworth, one of Cornwall’s most reclusive but exciting sculptors and including some large scale photographs of his work by Jem Southam. In 2015 Ray Exworth died, leaving behind his wife, Susie, and the Wroxham Trust to oversee the legacy of his estate; including The Circus, still unseen.

Jem Southam, currently Professor of Photography at Plymouth University, a very fine and widely collected photographer and close friend of Ray and Susie,  visited regularly during the 1980s and in so doing was able to make a remarkable series of photographs of Ray’s work. Now Jem Southam has returned to Ray’s sheds with his camera, his memories of Ray, and a renewed desire to document and share this lifetime’s work.

shed opposite the house

Jem Southam was born in Bristol in 1950. He studied at the London College of Printing for a Higher Diploma in Creative Photography from 1969 to 1972. He is now Professor of Photography at the University of Plymouth. He is known for his large and detailed colour photographs, taken with a large-format camera. 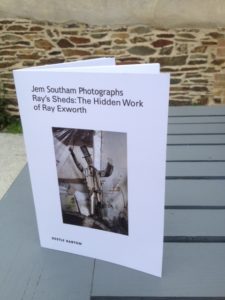 Introduction by Jem Southem and Essay by Susie Exworth 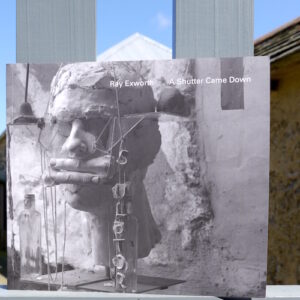 Published to coincide with the exhibition Ray Exworth: A Shutter Came Down (17 Sep – 30 Oct 2011)

Soft back with 36 pages 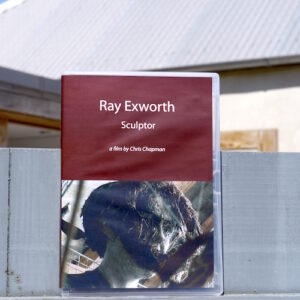 Commissioned by The Ray Exworth Wrexham Trust to coincide with the exhibition Ray Exworth: A Shutter Came Down (17 Sep – 30 Oct 2011)

Back cover summary:
For over 45 years Ray Exworth has worked in a remote part of Cornwall producing monumental sculpture, much of which draws on memory and experience of his childhood in East Anglia during the Second World War.

Working briefly as an engineering apprentice, and later as a meteorologist in the Civil Service, Ray entered Ipswich School of Art to study painting in 1951.

The effect of a trip to the Musee Rodin in Paris, an experience that Ray described as ‘almost like a religious conversation’, prompted his decision to become a sculptor.